Sunday morning October 17th, 2010 began a little different than most of my busy weekends as a Realtor® in Long Beach and Lakewood California.

On this special day I was up at 4:30 a.m. as I began to get dressed for my ride in the Long Beach Bike Marathon. I gathered my water, snacks, helmet, etc. And like any good traveler, I double checked my bike’s tire pressure before I loaded it into the car.

First stop was to rendezvous with my niece Devon at her place … and from there we would both ride down to the start line of the marathon.

This was Devon’s first marathon and she was a little apprehensive but very excited. At 5:15 a.m. I called her on my cell phone ... “I’m downstairs are you coming?” She replied back … “But Allison, it's still dark outside!”

You see, we were riding our bikes through the streets of Long Beach before dawn and … in the dark? We had our bike lights on and needed to travel about four miles from Devon’s house in order to reach the start line of the race. 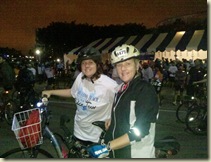 I explained to Devon ‘I’m not worried as I know there will be others that will be joining us soon.’  Devon was surprised and relieved as we rode along toward the starting line because as we continued traveling along even more riders began to join us. She exclaimed … “Wow, All these people are up and riding in the dark!”

We reached the start line about 5:45 a.m. and stayed in the back...as we needed to take it slow and steady because we don't want to be knocked down.

I think Devon was a little surprised as she expected a lot more racers … but most of the elite racers were up in the front. Back with us were the beach cruisers, the old bikes, and … some old riders.

One lady who was in her 70’s and dressed all in pink, told us … “two hours and I'm done!”  I thought to myself, not bad for someone on a one speed beach cruiser.

All the pictures you see were taken with my Motorola Droid 2 cell phone WHILE RIDING ON THE BIKE … so some of my pictures may be a bit blurry.

What a great day, there was a slight drizzle and great views! We rode past the Queen Mary, the lighthouse, Shoreline Village and into Alamitos Heights and Los Altos as we rode past the pyramid at Cal State Long Beach. 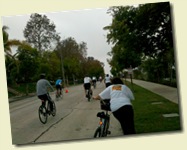 Devon stopped at an aide station and asked for some Advil … when they asked her what she suffered from, she told them … “A sore butt!”

After completing the first part of the 26.2 mile race course, we rode back down Ocean Blvd. toward the finish line where we proudly received our medals. 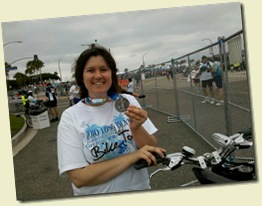 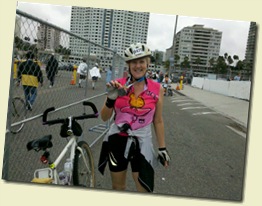 What a great ride … what great riders. I am looking forward to next year and will see you next March 2011 for the Miller Children’s Hospital ride which is Thirty-One miles.

As I completed this challenge and reflected about going on this ride … it made me realize just how lucky we all are to live in such great area such as Long Beach and of course Lakewood California.